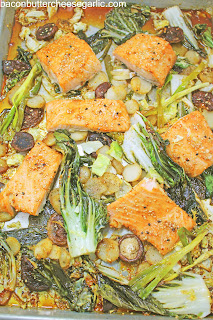 Do you ever feel like you’re in a cooking rut?  I have felt that some lately.  My dishes usually turn out good, but there’s no wow factor.  My pictures haven’t been all that great lately either.  I don’t know if I’ve been tired or boring or what it is.

But I think I’ve overcome that hurdle.  I wanted to do an Asian salmon dish that was easy to make but with some wow factor.  I made this last night, and I was worried that it would fall flat.  I mixed up the sweet Asian glaze for the veggies and tasted it.  Man, was that stuff good.  I almost drank it!  Not really, but it was seriously good.  Then I made a wasabi and sriracha mayo to go with it.  Perfect amount of heat.  Dang, that stuff was good too.  Then I chopped a few veggies, threw it all on a sheet pan, and put it in the oven.

My daughter came home from her friend’s house about the time I got it out of the oven.  She came running into the kitchen excited about the smell.  She thought it was teriyaki sauce by the smell.  We cooked up a little ramen to serve it over.  This stuff was FANTASTIC!  This is by far the best dish I’ve made in a long time!  We raved and raved about it.  This Asian Roasted Salmon & Veggies was super easy to make and very impressive.  This would be great for date night or impressing in-laws.  It’s that good.  I promise.  Enjoy!

NOTES:  Japanese seven spice can usually only be found in Asian markets.  You can use Chinese five spice or leave it out altogether.  For the bok choy, cut most of the white parts off and separate the leaves.  For the green onions, cut the bulb end off and discard it.  Then just cut the long onion in half so that you have about 3-4 inch sections of whole onion.
Also, I left the skin on the salmon so that it would hold together and then we just removed it to eat it.  You can cut the skins off before cooking if you like.

Preheat the oven to 450 degrees.  For the mayo, whisk all of the ingredients together and put it in the fridge until you’re ready to eat.

For the glaze, whisk the ingredients together and set it aside.

Put all of the veggies on a sheet pan and drizzle half of the glaze over the veggies.  Season the veggies with salt and pepper.  Mix them around with your hands and spread them out into a single layer (as much as you can).  Cook the veggies for 15 minutes.  Put the salmon on the sheet pan with the veggies and brush the remaining glaze all over the salmon.  Return the pan to the oven and cook an additional 15-18 minutes or until the salmon is done and the veggies are tender.  Serve the salmon and veggies with the mayo. Sumber http://baconbuttercheesegarlic.blogspot.com 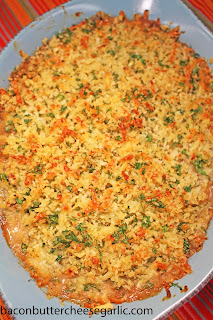 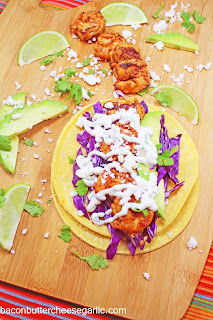 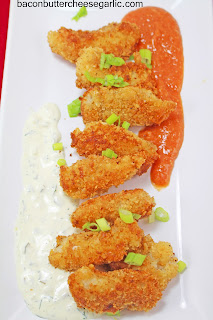