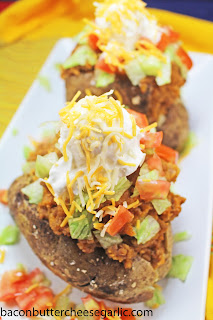 So a lot of people, like us, usually fit in a “Taco Night” maybe once a week.  We love all kinds of tacos in our house, so we probably eat more than most people.

But what if you paired a taco with a baked potato?  Intrigued? My Twice-Baked Taco Potatoes were spectacular!  Everyone was very skeptical and thought it wouldn’t be good.  But, when they ate them, they all wished it made more than 4 potatoes!  They are that darn tasty and easy too!

Preheat the oven to 400 degrees.  Wash and dry the potatoes.  Rub them with olive oil, salt & pepper.  Wrap them in foil and bake them about an hour or until they are soft.

When the potatoes are almost done, cook the hamburger meat, onions and garlic in a skillet until the meat is done. Drain the grease, if necessary.  Add in the taco seasoning and the water called for on the packet and cook a few minutes to cook out the liquid.  Set the meat aside.

Reduce the oven temp to 350 degrees.  Cut into the potatoes and scoop the insides of the potato out into a bowl, being careful to keep the skins intact.  Mash the potatoes with the sour cream and butter and a bit of salt and pepper, if desired. Stir the taco meat into the mashed potato mixture.  Fill the potato skins back up with the mixture.  It will be heaping.  Top with some cheese and return them to the oven for about 10 minutes or until they are heated through.  Serve with sour cream, salsa, chopped tomatoes, lettuce, and cheese. 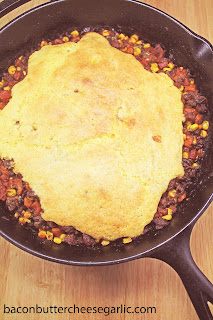 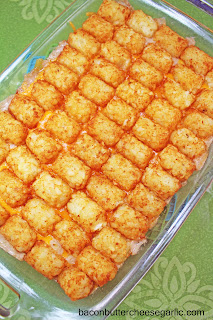 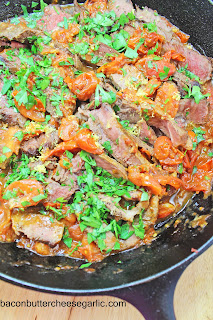